It looks like Sarah Jane has trouble with kinky characters!!! This time a colonel of UNIT!!!

IF YOU HAVE COME HERE PLEASE REDIRECT YOUR BROWSER TO WWW.SCIFIBULLETIN.COM

Harrison Ford will be reprising his role of Rick Deckard in the long-gestating sequel to Ridley Scott’s classic movie, Blade Runner, it has finally been confirmed.

Denis Villeneuve is set to direct the film, which will be executive produced by Scott for Alcon Entertainment. Hampton Fancher, who co-wrote the original movie with David Peoples, and Michael Green have written the original screenplay, based on an idea by Fancher and Scott. It will be set some decades after the first film.

“We are honoured that Harrison is joining us on this journey with Denis Villeneuve, who is a singular talent, as we experienced personally on Prisoners,” Alcon’s Andrew Kosove and Broderick Johnson said. “Hampton and Michael, with Ridley Scott, have crafted a uniquely potent and faithful sequel to one of the most universally celebrated films of all time, and we couldn’t be more thrilled with this amazing, creative team.”

IF YOU HAVE COME HERE PLEASE REDIRECT YOUR BROWSER TO WWW.SCIFIBULLETIN.COM 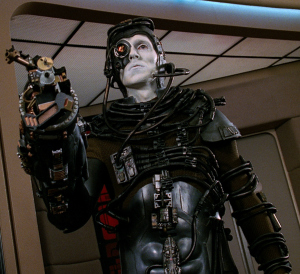 Maurice Hurley, the prolific writer and producer who created the Borg for Star Trek: The Next Generation, has died, aged 75.

TNG executive producer Rick Berman announced the news on Twitter: “We lost one of Star Trek‘s most talented minds. Maurice Hurley produced seasons 1 and 2 of TNG. He was one of a kind. So very sad.”

Hurley became co-executive producer of TNG at the end of the first season, but left at the end of the second, although he contributed further scripts. Not only did he create the Borg in the episode Q Who, but he also provided their distinctive voice. However, he was apparently not popular with everyone involved with the show, with Rick Berman himself noting that Hurley was the reason that Gates McFadden left the series during the second year, and various writers also departing because of him.

He also worked on The Equalizer…

Calista Flockhart has joined the cast of CBS’ forthcoming SUPERGIRL series as Cat Grant, a character who has roots in Superman comics.

Introduced in Adventures of Superman #424 by creators Marv Wolfman and Jerry Ordway, Cat Grant started out as a gossip columnist for the Daily Planet, however, Variety reports that this version of Cat will be “a self-made media magnate and founder of CatCo.”

Cat Grant has appeared on-screen before: In LOIS & CLARK: THE NEW ADVENTURES OF SUPERMAN, she was played by Tracy Scoggins, and by Keri Lynn Pratt on SMALLVILLE.

SUPERGIRL is being planned for a fall debut.